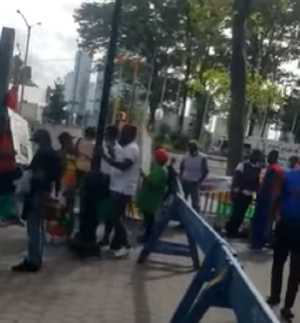 Some Ghanaians welcomed the president

But for the location and faces of white security officers, one would have concluded it was just some Ghanaian groups dishing it out to each other on the streets of Accra.

In the more than two minutes video which has been trending on social media, some Ghanaians, presumably pro and anti-government protestors were seen hurling invectives at each other.

From insults in the Ga language to some of the commonly-used Akan insulting words, the two groups clashed calling action from security officers who quickly intervened to avert a brawl.

One group was accusing the other of being agents of government, flown from the ‘streets of Chorkor’ to welcome President Akufo-Addo and his entourage.

The other party claimed the other was humiliating the country with their persistent protests about happenings in the country.

All of this was happening as a result of President Akufo-Addo’s presence in the United States to attend the United Nations’ General Assembly.

He was hit with two matches, one by a pro-government group to welcome him to the US and the other by persons who ascribe to the ideals of the #FixTheCountry campaigners.

The incidents did not affect the president’s activities in the US as he addressed the gathering of leaders from various parts of the world.

President Akufo-Addo in his speech urged United Nations to provide assistance to African countries as they attempt to navigate the impact of coronavirus.

President Akufo-Addo also highlighted the efforts being made by his government to grow the Ghanaian economy.

Source: www.ghanaweb.com
Related Topics:CLASHGHANAIANSUS
Up Next