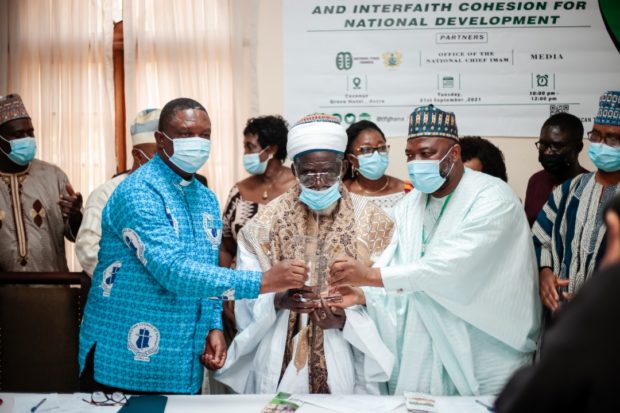 The C E O of the Institute for Security, Disaster and Emergency Studies, an NGO, Dr. Ishmael Norman has charged Ghanaians to work collectively as citizens to deepen the peace the country continues to enjoy in the subregion.

According to him, although unemployment, the recent COVID-19 pandemic has threatened the peace of many countries in the sub-region, Ghana continue to enjoy peace and ranked as one of best peaceful countries across the globe. He said ” it is a collective moral duty to see where we are. It is our duty to analyse collective action to deepen peace, We have good reasons to be happy and thankful to God”

Speaking at a symposium organized by the Light Foundation, an NGO to mark this year’s World Peace Day in Accra on the theme ” Fortifying Intercultural and Interfaith Cohesion for National Development” he said the peaceful coexistence among Ghanaians is attributed to respect for each other, adherence to institutional order such as security among others. This according to him could be maintained through acts such as legislation.

He said ” Parliament could pass a legislation on hate speech to protect ethnic, weak and vulnerable groups for peaceful coexistence. The National Chief Imam, Sheikh Osman Nuhu Sharubutu on his part also urged Ghanaians to desist from engaging in acts that has the tendency to undermine the prevailing peace in the country.

According to him, man was created by God to live and tolerate each other irrespective of their backgrounds.

He noted “peace is what God made available to humanity and so it is important we live peacefully among ourselves despite ethnic, cultural, religious and political diversities. Peace is what is required by all nations, let us recognize our diversity in all things”.

The General Secretary of the Christian Council of Ghana, Dr. Cyril Fayose underscored the need for Christians to live peacefully among themselves despite their ethnic backgrounds to emulate the example of the Good Samaritan who extended a hand to someone in need.

“Let us welcome all people irrespective of their religious or political inclinations, whether they are Muslims, Christians, Jewish, we are all Children of the Almighty God. An Islamic Scholar and cleric, Sheikh Said Muktar Abubakar for his part enjoined Muslims to live peacefully with their neighbours wherever they find themselves stressing that the purpose of humanity is more important than any other thing we find on earth, ‘how important is the issue of neighbourhood to you, we should be good to each other, your parents, all destitutes in society are all your neighbours as the Qu’ran explains’.

The CEO of the Light Foundation, organizer’s of the symposium, Sheikh Ali Abubakar Napari said it was important for all nations to embrace peace as the only pivot for sustainable development.

” it is as a result of this that the Light Foundation in line with the sustainable development goal 16 ( peace, justice and strong Institution) has brought together stakeholders and key prominent people to interact from an Interfaith, security, political persuasions to strengthen the ideals of peace in the country.

Sheikh Napari therefore called on all relevant bodies to collaborate with the Organisation to institute programmes that will continuously promote peace and well being of people in society. The National Chief Imam, Sheikh Osman Nuhu Sharubutu was presented with a citation by the the Light Foundation for his immense role in promoting peace and security beyond the borders of religion and ethnicity in Ghana.

The event brought together religious and traditional leaders who among other things discussed best practices for peace building in Ghana.

Related Topics:'It is our collective action to deepen peace'- Dr. Ishmael Norman
Up Next

Meet Mike Eghan, the veteran Ghanaian broadcaster who dazzled on BBC and GBC

One dead, 10 injured in gory accident at Abura Dunkwa