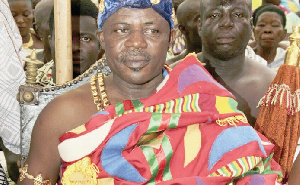 The chief of Ejura in the Ashanti Region, Barima Osei Hwedie II has dispelled rumors that he has knowledge of the death of Otumfuo’s Asamponhene, Nana Kwadwo Afordour who was murdered on Sunday evening.

In a wide spread media report, it is being alleged that the respected Chief invited the deceased for a tête-à-tête in Ejura on Sunday and in the process met his untimely death.

But in an exclusive interview with MyNewsGh.com, Barima Osei Hwedie II who is also the Director of Protocol at the Vice President’s office denied the allegation and revealed that he is in Paris capital of France at the moment with a high profile delegation.

“I left Ghana on Friday August 16, 2019. I sought for permission before I left so where from the rumor that I invited him over to Ejura? The allegation is unfounded.” He stated.

The Ejurahene asked Ghanaians to treat the rumors with the contempt it deserves and assist the Police with the needed information so the perpetrators can be brought to book swiftly.

He expressed shock in the demise of his colleague Chief describing him as a man of high standing repute and integrity.

The Asampohene known as Nana Fodour, was reportedly stabbed multiple times in his vehicle at Ebuom on the Ejura – Nkoranza road in the Ashanti Region on Sunday, August 18, 2019.

Police officers received information that a vehicle had been involved in an accident on the road but when they arrived at the scene, they realised the victim, who was later identified as Nana Fodour had been stabbed.

The police have initiated investigations and has so far arrested three persons.

He was a direct relative of the Asantehene, Otumfuo Osei Tutu II.