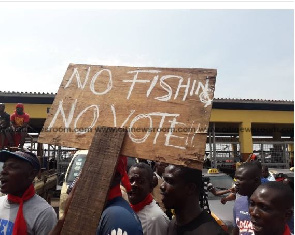 Some fisherfolk in Jamestown in Accra have threatened to stage a demonstration to protest the government’s decision to ban fishing for a period in the country.

Some of the fishermen say they are not adequately prepared to stay out of work for a month.

The closed season is intended to allow fish spawn to improve Ghana’s fish stocks.
In an interview with Citi News, leader of Friends of Artisanal Fishermen, Nii Nertey Netteh, stated that a closed season is not in accordance with the government’s plans from last year.

“We don’t understand the rationale behind this closed season. If it is also to increase the stock of fish in our waters, then the period for which they are going to implement this is a total shift from what they said last year. Although we think it is not the right time for it to be done, government still wants to go ahead because they believe that is what should be done”, he added.

Last year when the closed season was announced, some fishermen in Accra called on the government not to proceed with the ban as it would affect their jobs.

Some fisherfolk at James Town and Chorkor in Accra have said the ban will affect them and their families.

The Ministry of Fisheries and Aquaculture announced the nationwide closed season for fishing as May 15 to June 15, 2019.

Sector Minister, Elizabeth Afoley Quaye, said her outfit has therefore had several engagements with the various stakeholders this year, to arrive at the date, adding that the Ministry will collaborate with the Ghana Navy to ensure strict compliance.

She also said that the fisherfolk have assured them of their willingness to comply with the ban.

“This year, we wanted it to be a demand-driven activity and voluntary. So we asked the fisherman themselves to give us the date that makes them comfortable. In our consultations, we came to a conclusion; the fishermen themselves give us the dates which they believe could do the closed seasons. So they gave us the 15th of May to the 15th of June for the inshore and artisanal fishermen. The industrial trawlers also agreed their closed season from the 1st of August to the 30th of September”, she said.

Previous The Golden Stool; a symbol of Asante power and unity
Next Shocker as Ghana Tourism Authority now charges for selfies on Adomi Bridge