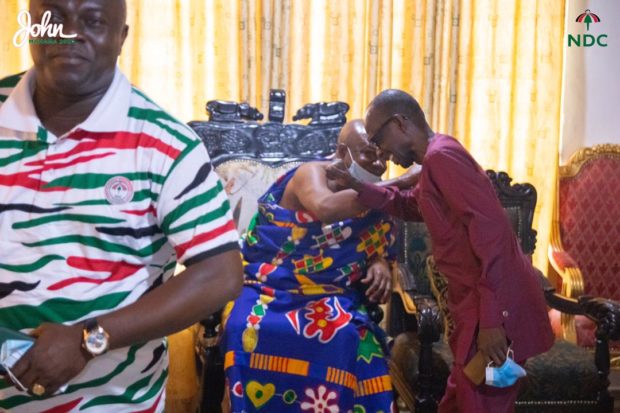 The long saving General Secretary of the largest Opposition party in Ghana, National Democratic Congress,  Hon. Johnson Asiedu Nketiah today paid a courtesy call on the Paramount Chief of Kumawu as part of his campaign tour in the Ashanti Region.

He used the opportunity to explain to the traditional ruler the policies and priorities of next NDC government. The promise from the NDC people’s manifesto to establish Training Institute for Traditional Authorities was also highlighted by him. Recounting the numerous projects done by NDC under Presidents JJ Rawlings, Mills and Mahama of NDC party, he appealed to them to rally behind the John Mahama and Prof. Jane Naana Opoku Agyeman ticket to take the the nation from insecurities and hardships.

On the part of the revered Kumawu Paramount Chief, he thanked the NDC party for the water projects given to the people of Kumawu and its adjourning communities.

He also commended Former President Mahama for the construction of the Kumawu District Hospital, a project which he complained has been abandoned by the Akufo-Addo government.

The Chief also appealed to the NDC to complete the construction of the Hospital project and the phase II of the Kumawu Water Project.

The NDC scribe had visited the Agogo Paramount Chief, Nana Akuoku Sarpong, the leader of the Saviour Church in Agogo as well as the Zongo Chiefs where he appealed for massive votes for the NDC on December 7th 2020.