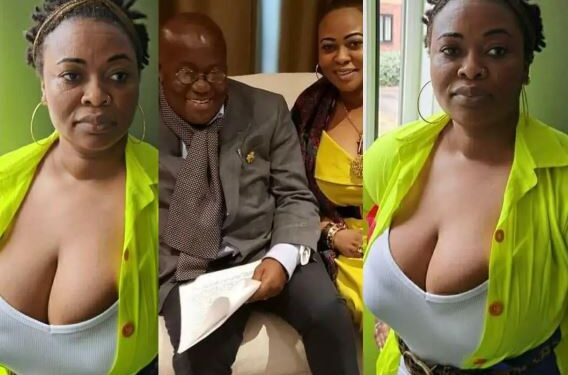 Elements of the Opposition National Democratic Congress on social media have taken up the matter with series of posts for equalization.

Readers of MyNewsGh.com will recall how this website serialized John Mahama’s alleged “love triangle” with Tracey Boakye and Mzbel when the news broke in 2020.

Prior to the election to the 2020 election, John Mahama’s name was closely associated with these “Slay Queens”, particularly, rumours swelled that Mr. Mahama is “papano” and father of Tracey Boakye’s daughter. Ms Boakye’s East Legon Mansion was rumoured to have been bought by the “Papano”. There was no official response from the NDC or John Mahama.

Pictures which source is doubtful have been circulating which suggest a close relationship existed between the said Evelyn Serwaa Broni and President Akufo-Addo.

According to her, following some private jet pictures she posted on social media which showed a reflection of the President after a Kumasi funeral trip, she was ordered to take it down and the relationship went sour but the two kept in touch. She revealed that at one point President Akufo-Addo told her his National Security had advised him to stay away from her as she could cause problem.

On the private [jet] pictures, she claimed that the President expressed doubt that she probably had kept some of the pictures to herself. And so when she got back to Canada, President Akufo-Addo began calling and allegedly threatening her.

She alleged that during her visit back to Ghana in which she was in constant Communication with President Akufo-Addo, she was informed by him to meet Hopeson Adorye who gave her some amount of Ghc20,000 allegedly from the President to pay her fees.

Hopeson would later storm her Golden Tulip Hotel room (booked in his name) to allegedly tamper with her laptop same time she and her “partner” were being “robbed” on the Accra-Dawhenya Road while enroute to Togo for a private visit. Armed plain cloth alleged National Security officials accosted her entourage amidst gunshots. They seized all the entourage’s cash, wallets, passports and gadgets.

Some persons have said Serwaa Broni was on her way to Togo to allegedly use the private pictures in her possession for some sort of bargaining with some unknown persons. She didn’t respond to this.

“Living in fear and suffering PTSD after the lead government of the NPP staged my robbery with the help of “Hopeless Adoyfoo” Hopeson Adorye and some armed national security boys. Proceedings leading to my unfortunate attack on October 24th 2019. 2 years ago.” she wrote.

Serwaa Broni claimed that but for the fact that she is Canadian and not Ghanaian, she could have been possibly killed to hush up the story as various persons called to plead with her to keep quiet. back then in 2019.

She revealed that her therapist says now is the time to speak on the issue to free herself.

This is how cheating starts