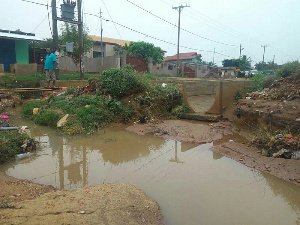 The Assemblyman of Bubui Electoral area in the Okai Koi South District, Hon. David Abalo commenting on the abandoned project said, “The project which was commenced in 2013 and halted in 2016 and since it has not been completed, it has become a danger to residents.”

Speaking in an interview with Samuel Eshun on the Happy Morning Show, he admitted that the incidence of flooding has become a major problem in the country. Apart from the destruction of properties and economic losses, people living in flood areas are at a high risk of contracting diseases from bacteria like cholera.

Although the Accra Metropolitan Assembly (AMA) is responsible for the development, improvement, and management of human settlements in the district, Hon. David Abalo says, “nothing can be done because of financial constraints. The AMA has a huge debt problem and cannot proceed with any development without the aid of the government.”

He also added that a committee has been formed and all findings have been submitted to the executives and hopefully the incoming Municipal Chief Executive(MCE) will help take on the development and successful completion of the project.

A resident of Atico Bubuashie, Samuel Ampadu Kyere sent in a citizens report to the ‘Oman Nu Mu Te Sen’ segment of the show for an address to be made on the plight of residents who suffered after heavy rains because of an uncompleted drainage project.

With parts of the project being blocked by some private developers and residents, those without the means now have rainwater accumulated in high volumes at their homes and this has become a huge source or worry. Community members believe a quick intervention can resolve their problem and make their lives comfortable.

44 villages in Drobo State support the Anti-LGBTQI+ Bill, warns MP not to vote against it