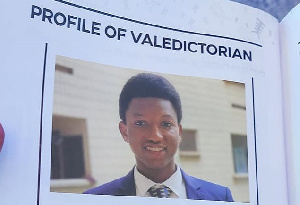 Four years ago, Ali Inusah was a herder at Katamansu near Ashaiman in the Greater Accra Region. He had just left Senior High School and was yearning to continue his education but there were clear financial hurdles ahead.

It was only after the intervention of his big brother, who brandished Inusah’s impressive WASSCE results at a stranger, that he had his ‘breakthrough’ and secured a scholarship to embark on the dream of pursuing tertiary education.

That stranger was a journalist with Accra-based Citi TV, Umaru Sanda Amadu.

Sanda’s intervention afforded Inusah a joint scholarship from the media outfit and the University of Professional Studies, Accra (UPSA), where he studied accounting.

At the recent graduation ceremony of UPSA, Inusah’s sterling academic record did not only secure him a First Class but he was also chosen as the Valedictorian for the graduating class.

Umaru Sanda’s post about Inusah’s journey from the bush to the podium:

Today is one of my proudest days in life. 4 years ago, I was driving my father to visit his brother at Katamansu near Ashaiman when a gentleman emerged from the bushes brandishing the WASSCE results of his junior brother. I screamed in excitement when I saw the As on the paper.

His brother asked that I help. If I didn’t, he told me, his little brother would remain a herdsman slaving in the bushes for next to nothing. I discussed the boy with my bosses at Citi FM, Sammens and Bernard Avle. They were wowed and decided this boy must not be left to “rot” in the bush.

Citi FM and UPSA offered him a joint scholarship to study Accounting. Today, Ali Inusah did not only graduate with First Class, but also delivered a speech as the Valedictorian of the graduating class. His speech made me tear up and today, I am very happy and thankful to God, that one other under-privileged person has been given a leveler.

What the graduation brochure said about the 2021 valedictorian 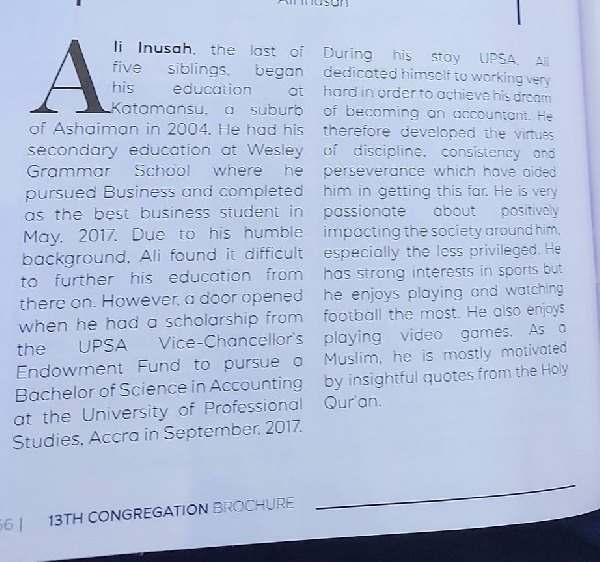 Source: www.ghanaweb.com
Related Topics:UPSA
Up Next

LGBTQI debate: Love the sinner, hate the sin, I’m not there to judge them – Father Campbell