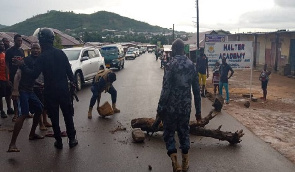 Some irate youth of Yohe, a suburb of Odumase-Krobo in the Eastern Region on Wednesday, 22 May 2019 clashed with officials of the Power Distribution Service Limited (PDS) after the officials of the state power distributor resumed their mass disconnection exercise in the area.

A police situation report said about 10:00 GMT, PDS officials of the Krobo district switched off the main transformer at Yohe over the locals’ refusal to pay their bills.

The agitated youth blocked the road with cement blocks and firewood and set tyres on fire to prevent the PDS officials and the police escort from carrying out their exercise.

Eventually, the transformer was switched off and the blockade cleared.

The irate youth, however, pelted the team with stones from their hideout, smashing the windscreen of a Nissan pickup with registration No. GV 2318 – 14 belonging to the PDS.

The situation report said the exercise came to a successful end at around 1100hrs without any incident.

However, a local reporter at Agomanya, Bennet Yoavi, told Valentina Ofori-Ariyie on Class91.3FM’s 505 news programme that stray bullets fired by the police hit nine people, including passersby, injuring them in the process.

Some of the injured persons, he said, have been taken to the hospital for treatment.

On Monday, 20 May 2019, scores of irate youth in Manya Kpongunor in the Lower Manya Krobo District also clashed with officials of PDS following a similar disconnection exercise which resulted in three persons sustaining injuries.