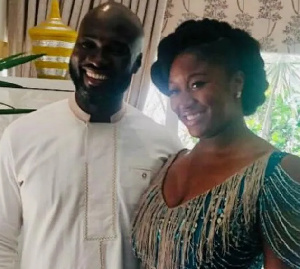 Kofi Jumah in an Okay FM interview disclosed that the former president who is a godfather to his son walked him to the home of the president.

He explained that he had to take a back seat and allow Kufuor take charge because of the relationship that exists between him and the former president.

“I have a close relationship with President Kufuor so he knows my son very well. Once we told him about the marriage, he agreed to lead my son and take him to the in-law’s house. So, I’m not the one who took my son to President Akufo-Addo, it was former President Kufuor who led him and spoke to the president that this is my grandson and I’m bringing him to your family,” he said.

Kofi Jumah also opened up on how his son met Edwina Akufo-Addo who is the fourth daughter of President Akufo-Addo.

He stated that the love story between the two began in the United States of America where they met.

He said that at the time, neither his son nor Edwina Akufo-Addo was aware of each other’s background and it took a while before they both realized that their parents were political figures who subscribed to the NPP ideology.

Kofi Jumah says due to the nature of Ghanaian politics and also his respect for the two, he took a backseat and decided not to actively involved himself in their union.

He revealed that the two were not strangers to the home of President Akufo-Addo as they had visited him a few times before they officially tied the knot on Saturday, October 9, 2021.

“The children used to visit the presidency. They went there quite often but I took myself out because I wanted to give them that respect as adults. Whenever the family called me, I chose not to participate because I didn’t want people to drag the president in it,” he said.

Kwabena Jumah and Edwina Akufo-Addo tied the knot at a private ceremony reportedly held at the presidential villa last Saturday.

The event was attended by Vice President Mahamudu Bawumia and his wife as well as other leading figures of the party.

‘Disagree with us but don’t threaten anybody, we’ll not be gagged’ – Pro-LGBTQI+ bloc