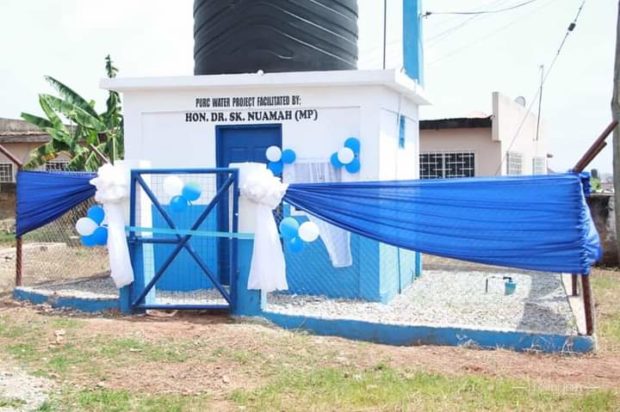 Four communities in the Kwadaso Constituency of the Ashanti Region have benefited from the Public Utilities Regulation Commission’s (PURC) pro-poor water expansion project.

Under the project, four boreholes have been constructed in different localities of the communities including Nwamase, Kokode, and Nyankyerenase, to improve regular portable water supply to the community.

The people, especially women and pupils of the four communities used to walk long distances in search of water for their various house chores and other activities hence the intervention.

Member of Parliament, Dr. Samiu Kwadwo Nuamah, who spearheaded the initiative, expressed gratitude to the PURC for sponsoring the projects in the communities.

He expressed joy that the system had been fitted with several taps to make access to water easy, saying, “for now, women who spend longer time searching for water in the middle of the night are now relieved”.

“As I have said, all ongoing projects I have initiated in the constituency will be completed, even if I leave parliament”, assured Dr. Nuamah as he called on residents to remain united and support the Akufo-Addo-led government to achieve its vision.

He also encouraged the people to take good care of the boreholes to extend the lifespan of the equipment so that they would continue to support their water needs.

At least 40 of such projects have been installed in communities across Ghana in the last eight years in partnership with the country’s water company.

“In this era of COVID-19 pandemic where hand washing with soap and water is one major protocol to fight the spread of the disease, this facility would help in the fight”, said Bawah Munkaila, the Head of Public Affairs, who represented Mrs Mami Dufie Ofori, Executive Secretary of PURC.

The Ohwimase M/A Basic School with a population of over 1,000, also benefited from the initiative.

Director of Education in the Kwadaso Municipality, Grace Ofosu Boateng, thanked the MP and the funders of the project for the relentless efforts in addressing their critical needs by providing the water.

Dissolve TOR Board – Workers to Akufo-Addo

Children tied to trees during weighing at Ga West Municipality