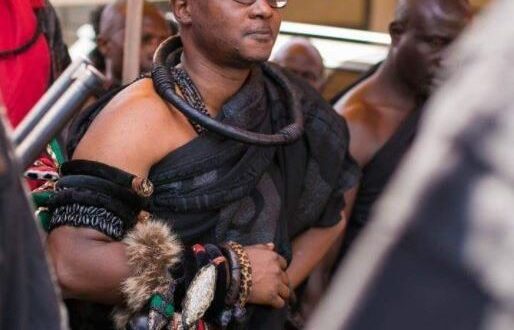 This follows promise made by President H.E Nana Addo Dankwah Akufo Addo that some road networks in Kwahu especially Abene would be constructed before Easter 2021.

Addressing a durbar of Chiefs and people at the forecourt of Abene Palace last year during the campaign period, the President said, the road would be constructed as he wished to celebrate Easter in April 2021 with Kwahuhene Daasebre Akuamoah Agyapong II.

“Abene road has been awarded on contract and very soon work will commence. Because I will join Daasebre to celebrate the Kwahu Easter next year, the road would be completed.” President Akufo-Addo Addo stated during his three-day tour of the Eastern Region in October 2020.

Speaking on Agoo FM Thursday following a terrifying accident at Abene which killed a timber truck driver while another person is in critical condition, Nana Asiedu Kwarbeng IV expressed worry over the poor state of the road networks.

According to him, successive governments have failed to help in developing Kwahu adding, Kwahu has nothing to boast of in terms of development.

He said very soon, the chiefs in Kwahu led by Kwahuhene Daasebre Akuamoah Agyapong II will openly express their displeasure over the poor state of Kwahu Roads and other issues confronting residents in the area.

When asked if Kwahuhene will be seen leading a demonstration for development he said: “Yes, this will come to pass. What have we gained from successive governments” he asked?