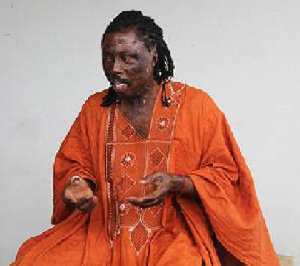 Popular Ghanaian traditional priest, Kwaku Bonsam, has said he would have bailed Ghana out of indebtedness if there was anything like blood money.

He stated unequivocally that, no fetish priest worth his salt will request human sacrifice for blood money.

“Human blood is also not required. There is nothing we do with that and I have never requested it. Ritual killings do not work,” Kwaku Bonsam said in an interview on Citi FM while reacting to the incessant ritual murders in the country.

Most of the suspects arrested, including two teenagers at Kasoa, named fetish priests as masterminds of their crime.

But Kwaku Bonsam maintained that, any fetish priest who requests for human parts for blood money just wants to dupe the person.

The famous traditionalist said it is possible to perform sacrifices with animals for riches.

Kwaku Bonsam charged the police to deal with charlatan fetish priests who bring their work into disrepute.