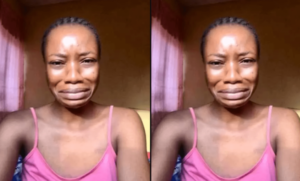 Gays in Africa are still ostracized since the legal framework has not made room for them to be embraced. This is why one Nigerian lady who found out that her man is a homosexual has greatly been affected her so much that she took to the internet to ask her followers how she has to deal with him.

A lady, identified as Vivian Rora asked her friends on social media what she has to do with her man who she just discovered is into men rather than women whiles reminding them that she still loves him.

See some reactions from Nigerians;