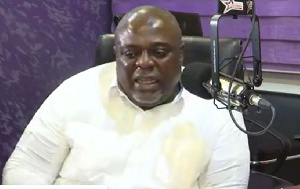 Anyidoho is speaking a myriad issues from his time with late President John Evans Atta Mills to Ghana under the Nana Akufo-Addo administration.

In recent months, Koku has made some comments which are believed to be targeted at the NDC and John Dramani Mahama.

Anyidoho who has been suspended by the NDC is expected to speak on his relationship with the party and John Dramani Mahama.

He will also touch on issues such as corruption, infrastructure issues and other issues.

Anyidoho will speak on issues involving his wife and his affiliation to Arsenal and Accra Hearts of Oak.

Watch the interview below