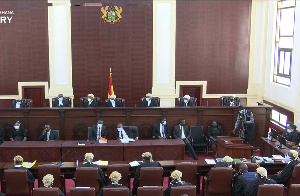 Justices of the Supreme Court are set to rule on the Election Petition on the December polls submitted by flagbearer of the opposition National Democratic Congress, John Dramani Mahama.

The legal tussle and cross-examination, which has taken place since January 14 will finally be decided today at the Supreme Court of Ghana.

The seven-member panel presided over by Chief Justice Kwasi Anin Yeboah, had asked lawyers for the parties in the case to file their closing written addresses.

Following the general polls of 2020, where the Electoral Commission Chairperson, Jean Mensa, declared Nana Addo Dankwa Akufo-Addo as winner, the National Democratic Congress flagbearer, John Dramani Mahama, took the EC and the president to court, on the grounds that no one met the constitutional threshold for election to the high office of President. They were also asking the court to invalidate the EC’s declaration of Nana Addo Dankwa Akufo-Addo as president.

The court before trial commenced set the following issues for determination:

1. Whether or not the petition discloses any reasonable cause of action

2. Whether or not based on the data contained in the declaration of the 1st Respondent (EC), no candidate obtained more than 50% of the valid votes cast as required by article 63 (3) of the 1992 constitution

3. Whether or not the 2nd Respondent still met the article 63 (3) of the 1992 constitution threshold by the exclusion or inclusion of the Techiman South constituency Presidential Election Results of 2020

4. Whether or not the declaration by the 1st Respondent dated the 9th of December was in violation of article 63 (3) of the 1992 constitution

5. Whether or not the alleged vote padding and other errors complained of by the petitioner affected the outcome of the Presidential Election results of 2020.

Watch a livestream of GhanaWeb’s coverage with experts and legal minds on the trial here: