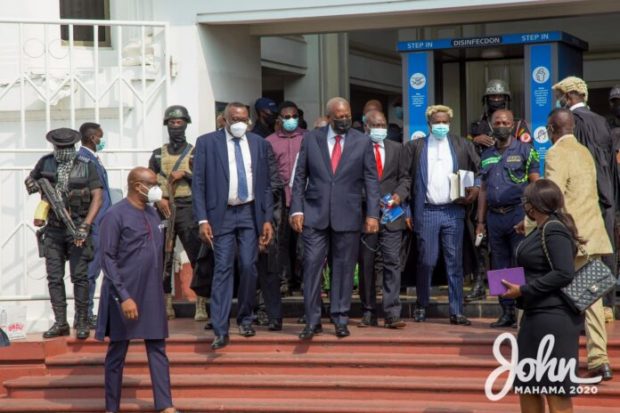 Former President John Dramani Mahama is not in a hurry to attend the court proceedings of his challenge of the 2020 presidential election petition at Supreme Court.

His Spokesperson for the 2020 Presidential Election Petition, Dr Dominic Akuritinga Ayine, said it was far from being the case that Mr Mahama himself will testify in court.

Dr Ayine said the Petitioner has filed a Petition and he was entitled as of right under the law to call witnesses to aid in the trial and that was what he has done.

Dr Ayine was speaking in reaction to comments made by Frank Davis, a member of the Second Respondent, President Nana Akuf0-Addo’s legal team that the petitioner who made the various allegations including the fact that he won the elections, has failed to file a witness statement himself in order for him to be questioned on those allegations.

He said “In 2013, President Akufo-Addo never testified in court, he called witnesses to testified on his behalf, so is it the case that when it comes to former President Mahama the law must change and compel him to testify?”

However, Mr Davis was referring to the new law, Constitutional Instrument 99 which was enacted to eliminate gaps noticed in the CI 47 used in the 2012 election petition trial.

Dr Ayine said Mr Davis sought to give the impression that they came to court because they wanted a relief to declare the Petitioner winner of the 2020 Presidential Election.

The Supreme Court on Friday, January 29, 2021, struck 7 out 10 paragraphs of Johnson Asiedu Nketia’s witness statement in the election 2020 Petition trial since he cannot substantiate the allegations therein.

According to the Supreme Court, those paragraphs would have been admissible if the petitioner, Mr Mahama was testifying personally in court and that those paragraphs were not in the knowledge of Mr. Aseidu Nketia.

Dr Ayine said what the Petitioner sought from the court was very simple, being that they wanted the “unconstitutional conduct” of the Chairperson of the Electoral Commission to be nullified.

He said It was also for the court to declare that none of the candidates met the requirements of article 63 (3) of the 1992 Constitution.

“I want to assure the public that the Petition filed by former President John Dramani Mahama was not any empty case,” he said.

“It is very important for them as a party that they are not in the case because they want to joke with the Ghanaian people but by the end of the day, the issues of accountability, and the issues of mathematics of article 63(3).

He said the counsel for the Petitioner had made strenuous and tedious submissions to the objections which were raised to portions of the witness statements.

“It is a repetition after repetition, which prompted lead counsel for Second Respondent, who cannot bear it any longer to remind the court of the repetitions,” he said.

The second Respondent’s counsel said when Mr Nketia took to the witness box, he remained largely evasive to every question that was posed to him indicating he could not answer some of the questions of the allegations.

He said “This is someone who in paragraph two of a witness statement has stated clearly that he was in court to lend aid to the petition filed by the petitioner, how can you come to court as a witness for a party and when you’re asked questions in court your response is that I do not speak for the petitioner, then why are you in that court.”