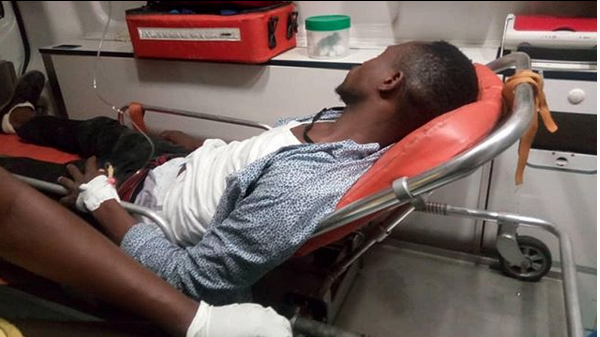 A 40-year old man Salom Seshie is battling for his life after a Police Patrol car from Kasoa Division knocked him down.

The incident happened at Doctor Jesus road at Gomoa Buduburam in the Gomoa East District of the Central Region.

In an interview with Kasapa FM news Yaw Boagyan, the victim Salom Seshie said, he was going to buy food to feed for his 7 children after coming back home from a construction site.

Salom said, upon reaching a section of the road, the police officers in the patrol car signaled him to stop, and before he realized the driver had knocked him down hitting a nearby food joint.

The glasses used for the food joint wounded him seriously.

Meanwhile, wife to the victim Vida Yeboah speaking to Kasapa FM called on IGP James Oppong Boanuh to come to her husband’s aid because the police officers have abandoned him.

When Kasapa FM News sought a comment from the Kasoa District Police Commander Superintendent Samuel Odame said he should allowed some time to investigate the matter before he can comment.