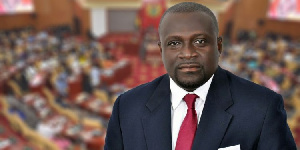 Dr. Mark Assibey-Yeboah, the chairperson of the Finance Committee of Parliament has lambasted the report of the Special Prosecutor on the corruption risk assessment on the Agyapa Royalties Minerals agreement.

According to him, Martin Amidu’s final report which he sent to the President was full of “conjectures, hypotheticals, hearsays. He’s put out these documents like a social commentator,” Dr Assibey-Yeboah told Joy FM in an interview on Tuesday evening.

Dr Assibey-Yeboah added that the work of the Special Prosecutor was uninformed and that he, Martin Amidu, does not understand the transactions because in doing a corruption risk assessment, he consulted neither the leadership of Parliament nor the leadership of the Finance Committee.

“I say Martin Amidu’s work is sloppy. You are criticizing the work of Parliament, you are doing a corruption risk assessment, I am chairman of the Finance Committee, you come for our report, you don’t even know how the meetings went and you sit somewhere and you are saying that you do not think that Parliament or the Finance Committee did a thorough job. He didn’t even consult me; he didn’t call me. He could have easily invited me to speak to me. This is the sloppiest job I’ve ever seen.” Dr Assibey-Yeboah stated.

He added, “You are passing judgement on an arm of government and you don’t take the pains to speak to the Majority Leader, the chairman of the Finance Committee, the Speaker of Parliament, all those connected with this approval process and he thinks we should swallow hook-line and sinker what he puts out?”

Dr Assibey-Yeboah, who is the MP for New Juaben South argued that though Martin Amidu wrote to parliament for documents concerning the Agyapa Royalties agreement, it is not enough for him to have relied on the documents alone.

“This is a person who is telling us that Government Official 1 [in the Airbus Scandal] is John Mahama but he cannot invite him or question him because he is running for elections. Is this law?…Which law says that if someone is running for the presidency, he shouldn’t be questioned for wrongdoing?” Dr Assibey-Yeboah quizzed.

In the corruption risk assessment, the Special Prosecutor concluded that there were breaches of the Public Procurement Act and the Public Financial Management Act with respect to how the transaction advisors were procured.

Martin Amidu stated that the process raised reasonable suspicion of bid-rigging and corruption.

He also claimed that the procurement of service providers for the transaction also gave rise to possible cronyism and nepotism, and could result in illicit financial activities and money laundering.

The President has since referred the deal back to Parliament for a review.