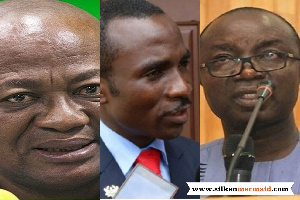 • Nine Individuals are vying for the position of Kumasi Mayor

• In the lead to make the top three are incumbent Osei Assibey Antwi, Kennedy Kankam and Sam Pyne

In tandem with Ghana’s constitution and the formation of his second term government, President Nana Addo Dankwa Akufo-Addo is in the process of nominating persons to take up the role of Municipal, Metropolitan and District Chief Executives for the various jurisdictions across the country.

For the Kumasi Metropolitan Assembly which is one of the biggest administrative areas in the country, nine individuals have filed to be considered for the role.

The list largely consists of heavyweight members of the ruling New Patriotic Party in the Ashanti Region which is considered the world bank of the party.

The candidates who have all successfully gone through vetting at the Assembly level include at least two former MPs in the persons of Collins Owusu Amankwaa (former MP for Manhyia North) and Kennedy Kankam (Former MP for Nhyiaeso).

The Ashanti Regional Secretary of the NPP, Sam Pyne, the Director of Metropolitan Roads for Kumasi, Engineer Nana Attah Poku and former Presiding Member, Kofi Senya are also in the race.

The rest are the incumbent Mayor of Kumasi, Osei Assibey Antwi, the Chief Executive Officer for Public Sector Reforms, Thomas Kusi Boafo, a former Secretary of the Otumfuor, Kofi Owusu Boateng and one Kwabena Manu.

In all, three out of the nine persons vetted will be presented to the President who will then make a final pick for the Mayor of Kumasi.

In the lead to make the top three are incumbent Osei Assibey Antwi, Kennedy Kankam and Sam Pyne.

In order to successfully make the President’s choice, one has to tick several boxes including the favour of the highly exertive powers of Manhyia Palace, the grassroots of the NPP, party executives and the goodwill of the people of Kumasi.

The Ashanti Region as a whole has some 250 individuals vying for the Chief Executive positions of the various MMDAs.