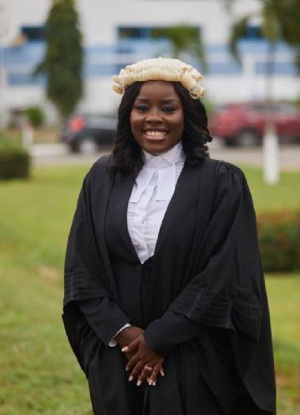 She has also been called to the Ghana Bar on October 1, 2021; this allows her to practice in all these jurisdictions.

She holds an LLM in International Law and International Relations and a First Class LLB Degree from the University of Kent in the United Kingdom. Christine pursued her Bar Professional Training Education (BPTC) in Nottingham Trent University, UK. Her remarkable achievement was her ability to secure pupillage as an International Student, after completing her BPTC- a very rare occurrence.

Per her LinkedIn profile, Christine is seeking to work as an international lawyer with institutions such as the United Nations (UN), International Criminal Court (ICC), African Union (AU), among others.

Young Ghanaian lady gets called to 3 bars in 5 years