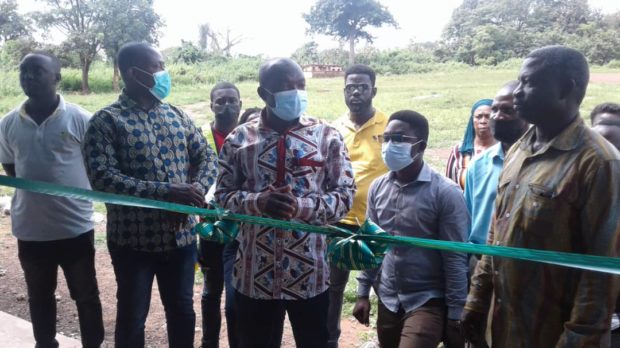 The Middle Belt Development Authority have commissioned nine projects at Jaman North District and Wenchi Municipality in the Bono Region under the one million dollars per constituency project initiated by President Akufo-Addo’s administration.

The projects were six unit classroom block with ancillary facilities for Sampa Presbyterian Primary school, Health centre with staff accommodation for the people of Asiri and Market centre for the people of Goka, whilest the Authority inspected similar ongoing projects at Ponkor and other areas in the district.

The new school building blocks, health centres and the market would eliminate the age-long struggles of the people who in the past, were struggling to have access to some basic infrastructural amenities in the area.

The Chief Executive Officer for the Middle Belt Development Authority Hon Joe Danquah who commissioned the projects on Monday and Tuesday at a separate ceremonies with assistance from his Deputy Mr Alexander Ferka in his address said the gesture was part of many infrastructural projects undertaken by his outfit throughout the various districts across the country.

He explained that, the Middle Belt Development was established in 2017 by an Act of Parliament, which is a vehicle to be used by the government to fast track the socio-economic transformation of the people in the Eastern, Ashanti, Bono, Bono East and Ahafo regions and within fews years the Authority have bridged the infrastructure deficit gap across these regions.

Joe Danquah said all the various stakeholders such as District Assemblies, Traditional Council, Middle Belt Development Authority would be engaged to put proper management in place so far as those projects are concerned and appealed to the general public to ensure proper maintenance culture of the facilities.

He averred that, the projects are being executed as a result of the needs assessment conducted in the various constituencies by the district assemblies, members of parliament, assembly members, traditional authorities and the general public at large.

He further commended the Chiefs, elders, past and present assembly members of the areas, as well as community members for their support in ensuring timely execution of the project.