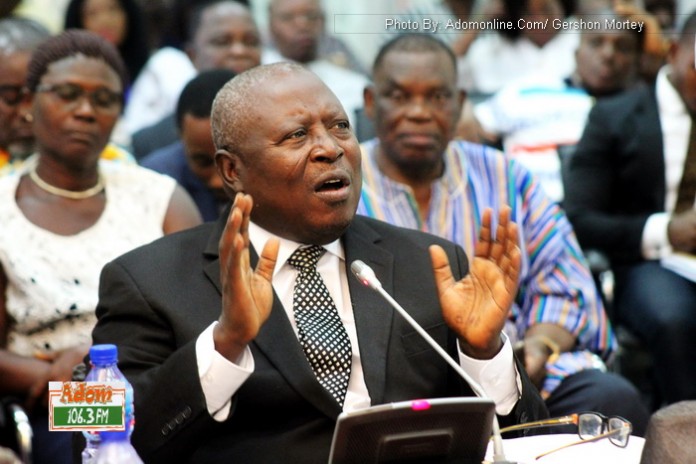 The governing New Patriotic Party (NPP) has already had enough of the Special Prosecutor and are calling for Martin Amidu’s head for publicly reacting to President Akufo-Addo’s decision to forward his (SP) report on the rejected Agyapa Royalties deal to Parliament.

A Deputy Minister for Works and Housing and Member of Parliament (MP) for the people of Subin in the Ashanti Region, Eugene Boakye Antwi, is unimpressed with Mr Amidu’s style of always resorting to the media on issues he disagrees with when they can be addressed outside of the public eye.

Others in the NPP, including the Communications Director Yaw Buabeng Asamoa, is on record to have expressed similar concerns about the attitude of Mr Amidu and his general performance as SP.

Mr Boakye Antwi, who thinks there are better ways to deal with such issues, has dared the Special Prosecutor, to resign if he strongly feels the Akufo-Addo government is not acting properly on his findings, adding Mr Amidu cannot be part of a government and be indicting it at the same time.

My advice to Martin Amidu this morning is that, he must resign because now, he has indicted the government that appointed him. So if he feels passionately about the things that he has written, he must resign. So that we see that he is a man.

Then resign. Akufo-Addo, should sack him if he has the power. Because, these are serious matters he has written, he cannot come and deny, he’s written it. We just pamper people in Ghana for nothing”, he said while contributing to a discussion on Metro television’s Good Morning Ghana show on Wednesday.

He viewed the onetime Attorney General and Minister of Justice’s statement as one used to play to the gallery “You sit there as Special Prosecutor and you prefer to play to the public gallery. That is what he is doing.

Because, even if you disagree with the President (because they are all lawyers, lawyers always disagree) there is nothing wrong with that.

It is the essence of the profession, so if you disagree with the position of the president, quietly, you write one, you are being responsible and two, you are demonstrating maturity and professionalism, as well by writing to the president.

Mr President, with all due respect, a b c d, look at it again, that is what you do, but writing and putting them out, what is he expecting us to do? To come and sit here and discuss these things that he’s the most quintessential lawyer in the country?”

The Subin MP said, the SP in all his public discourses, portrays himself as though he is without blemish. He posited, Mr Amidu was acting as a politician and not a lawyer.

In his view, Mr Amidu acted in bad fate when he came out responding to Eugene Arhin’s statement to Parliament, because per his understanding of the issue, his reaction was directed at the President, adding he could have done the needful by writing to the President,to draw his attention to what he thinks was wrong in the directive to Parliament, instead of making it public.

“Even the correspondent with the president he made it public. These are all private matters. That is the question I am posing. Is Martin Amidu a politician or he is working as Special Prosecutor for the republic of Ghana?

Because, so far as I am concerned, this is what politicians do, not lawyers. With no disrespect to the profession, a very noble one, the profession that has fed me, I am not going to disrespect it [but] let’s face it.Things like this to me, is not the mark of a lawyer, let’s call a spade a spade. He is trying to make it appear that he is the only saint in this country”, he said.

Mr Boakye Antwi’s criticism of the Special Prosecutor, comes on the back of Mr Amidu’s statement on Tuesday responding to Director of Communications at the Presidency Eugene Arhin’s letter to Parliament on his report on the Agyapa deal, asking the House to look into it, following the dictation of alleged corruption, conflict of interest, nepotism among others.

In his report, Mr Amidu raised red flags over the deal and took a swipe at the Minister of Finance and other officials, who contributed to processes that led to the approval by Parliament. The Special Prosecutor insisted that several processes were flouted prior to the parliamentary approval.

Reacting to the corruption risk assessment report, Mr Arhin among other things directed the Minister of Finance, Ken Ofori-Atta, to send the agreement back to Parliament for the approval processes to begin from the scratch.

But Mr Amidu, who found everything wrong with the Presidency’s decision to send the report back to the August House said “I do not intend to be patronized as the Special Prosecutor as Mr Eugene Arhin, appears to have conveyed by the statement issued under his hand.

The sixty-four (64) page report was analyzed and assessed professionally and referenced with detailed analysis of the risk of corruption and anti-corruption assessment of the Agyapa Royalties Transactions from which no one can just pick and choose what he wants. The documents and the facts are real and were not manufactured by the Special Prosecutor.”

“The Office of the Special Prosecutor was either seriously intended to prevent and fight corruption or was only intended as a show piece to be trivialized. The sixty-four (64) page report must be taken seriously to make corruption a very high-risk venture in Ghana,” he added in the statement.

But responding directly to Mr Amidu’s letter and reading it in parts on the show on Wednesday, the Deputy Minister, questioned what business the SP had in going public on the matter to Parliament after it submitted it 64-paged finding to the president?

As far as he was concerned, he argued Amidu was done with his task and should not have come back to make any comment or even if he had, he should have known better by alerting the President, rather than writing to the media.

“What’s Martin Amidu’s business responding to a press release? You see, let’s situate the whole thing. Martin Amidu is the Special Prosecutor of the republic of Ghana, that’s his job, you have compiled a report submitted to the president, the president using his executive powers, referred the report to parliament, so what is this immediate release thing I am seeing?”, he rhetorically asked.

He went on “If the president wanted to write to you, he would have written to you. It concerns your office but your office sent a report to the President and the president has directed the document to be brought back to Parliament so far as I am concerned, your job is done.

If you are going to respond to press releases, then really…..? So what stops him from writing a letter to the president without making it public?”

When the MP’s attention was drawn to the fact that, the SP had indicated that he wrote the response for “clarity and truthfulness”, he quickly responded “don’t mind him, is he the only truthful Ghanaian living?”

Asked what will make the SP to come out the way he did with a strongly worded statement, disappointed Eugene said “You have to find out from him, me I have never understood him. He said, his actions look as though he is “being cajoled to do something or in the process of trying to do the right thing, people are trying to patronize you and all that. What is he seeking to achieve? That is my point”.

“To be fair, I have followed Martin Amidu for a long time, sometimes, he needs to be careful. You are talking about a whole president of Ghana and the Finance Minister and you are saying they are picking and choosing. That’s what he is referring to. Randy, why will anyone in his right mind be doing this?” he fired again.

Not impressed with his output so far, the Subin MP said “I mean Hon Martin Amidu must sit up. I mean really, you have been there for almost three years; a lot of money have been pumped into that outfit.

Lawyer and a member of the National Democratic Congress (NDC) communication team, Godwin Edudzi Tamakloe, said he was happy Mr Amidu who was appointed to spite former President John Mahama, has turned his guns on the government.

“I am happy the NPP is having a feel of Mr Martin Amidu. You felt that you have gotten the man to finish Mahama. That was the thinking. Look, the day he was appointed and the announcement came or so, I saw my own senior Kweku [Baako]…… the dance in the studios of Peace FM, was something else”.