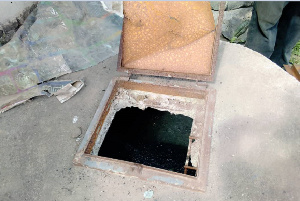 The Mamponteng District Police Command has launched an investigation into the death of a child who was found in a manhole a day after going missing at Aboaso in the Kwabre East Municipality of Ashanti Region.

Eric Gyapa, a one-year-old boy, went missing last Thursday as several searches for his whereabouts proved futile. He was however found dead in a manhole located at the back of a house Friday morning.

The deceased was found afloat the surface of water that had filled the manhole.

Nana Minta, an eyewitness who spoke to GhanaWeb said the water in the pit is believed to be bathing water used by the occupants of the house.

Other eyewitnesses suggested the child might have stepped onto a rusted metal that had been used to cover the pit.

Catherine Appiah, mother of the deceased, in an attempt to speak to the media collapsed and was rushed to a hospital.

The lifeless body of the child has since been deposited at the Ankaase Methodist Hospital morgue for autopsy and investigation.