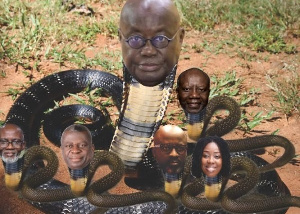 “Mother serpent of corruption” a phrase which until the late afternoon of Friday, November 27 was uncommon to some Ghanaians, has become the most used phrase on social media since Special Prosecutor, Martin Amidu used it in his second address to the President, Nana Addo Dankwa Akufo-Addo.

Amidu, a lawyer with admirable writing skills combined to perfection, the law language and the ‘normal English’ language, in which he slapped the tag of ‘mother of serpent corruption’ on Nana Addo Dankwa Akufo-Addo.

Amidu said that he used to be a disciple of President Akufo-Addo but after working in his administration as the lead figure in the anti-corruption battle, he has come to the realization that the president is not as committed to the course as he perceived.

He furthered that he was shocked that Nana Akufo-Addo whom he trusted as the ‘Moses of anti-corruption,’ turned out to be ‘the mother serpent of corruption.

“When I met the President on 23rd October 2020, I received the shock of my life when he demanded that I took no further action on the Agyapa royalties transaction anti-corruption assessment report for another week. That was when it was divinely revealed to me that the President whom I trusted so much for integrity only looked like the innocent flower of anti-corruption but he was really the mother corruption serpent under the innocent-looking flower,” he added.

The ex-Special Prosecutor literally identified President Akufo-Addo and his Finance Minister as the brains behind the Agyapa deal which he discovered to be the greatest corruption plot in the history of the country.

“I can now say as a citizen of Ghana on the basis of the Agyapa Royalties Limited Transaction rAeports that the transaction was suspiciously conceived by the Minister of Finance and the Presidency and implemented to serve only a few persons within the NPP,” he said.

The use of the phrase by Amidu has resulted in its popularity on social media as Ghanaians and party supporters express divergent views on the matter.

Most of the posts have snakes with the president’s head on it to depict the image Martin Amidu intends to create with that description of the president.

Below are some comments