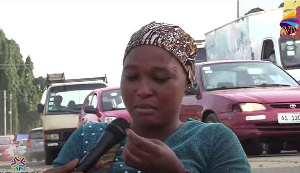 Single mother, Ramatu Inusah has made a shocking revelation about how her baby daddy gifted her daughter to his sister who can’t give birth.

In a chat with SVTV Africa, Ramatu explained that all her efforts to see her daughter have proved futile.

According to her, her biological daughter does not know she exists as she was taken from her when she was still two years old. The child will turn five in August 2021.

”My baby daddy decided to give out my daughter to his sister and they have refused to allow me to visit. They insult me whenever I call to talk to the child. He never cared for me when I was pregnant nor after I gave birth,” she told DJ Nyaami.

Ramatu added that she only saw her daughter in court at Agogo when she reported the case to the police. However, she couldn’t proceed with the case because it was a waste of time and money.

Her baby daddy is believed to be acting on a belief system by the Northerners. According to Ramatu, when a lady gets pregnant out of wedlock, the child is not hers after birth.

Previous Asamoah makes history in Serie A
Next Ursula, Amewu, Godfred Dame and 2 others to reappear before Appointments Committee