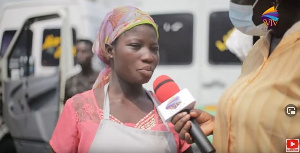 An ‘Asaana’ seller, Efata Ametorworglo has shared her plight with SVTV Africa concerning how her mother has treated her over the past few weeks.

Speaking to Ayisha Bayipa, Efata states that her mother blatantly told her she hates her while her brother calls her sick.

According to her, her mother ruined her relationship with her boyfriend by telling her colleagues Efata was three months pregnant.

“My mother just doesn’t like me. She lied to my colleagues at the market place that I was 3 months pregnant when it was just a month old.

My colleagues also called my boyfriend and told him about it.

Now, he doesn’t pick my calls anymore because he thinks it’s someone else’s child. Even after I confirmed at the hospital, he still wouldn’t listen. My unborn twins won’t know their father because of what my mother did,” Efata explained.

She further added, she has no place to stay with her 3-year-old baby currently.

Moreover, she still helps her mother pay off loans and doesn’t have enough to cater for herself.

Please contact SVTV Africa Foundation if you would love to help Efata and her kids.