Annan and Net2 owner Kennedy Agyapongslammed Captain Smart while discussing issues on ‘The Seat’ program which aired on Wednesday, July 21, 2021, which was monitored by GhanaWeb.

According to Annan, Captain Smart had his admission cancelled by a Kumasi-based private institution, the Christian Service University College, where he was pursuing a degree program.

A letter dated October 30, 2020, and signed by Professor Samuel Afrane, president of the university, stated that the admission of Captain Smart had been revoked over entry irregularities and other malpractices.

The letter titled: “Ineligibility for Bachelor of Arts Communication Studies Degree,” read in part: “We write in reference and as a follow up to the various communiqués with you during 2008 regarding yourself imposed and ill-motived appraisal of yourself from Level 100 to Level 200 coupled with the irregularities on the document/certificates you presented as admission required, which we later identified as fake and not representative of your good self.

It continued: “We regret to notify you that the University College is unable to award you its prestigious BA Communications Studies degree as we deem you ineligible on the basis of wrong and fraudulent entry requirements you presented and your refusal to regularize same during the period.”

The university which is affiliated with the University of Ghana added that it had communicated the decision to UG with the said letter also copied to UG Vice-Chancellor, National Accreditation Board among others.

Kweku Annan stressed that with this history, Captain Smart had no right to be insulting people who had fought hard to make a name accusing him of instigating protests in the country.

He had earlier charged that the Ghana Police Service must get involved in the issue and pick up Captain Smart for the illegalities that he engaged in.

The back and forth between Captain Smart and Net2 TV owner, Kennedy Agyapong, has been raging for the past few months.

Agyapong, who is a Member of Parliament for Assin Central, insists that Captain Smart still owes him monies after buying a home appliance from one of his shops. The last Captain Smart responded to the allegation, he asked Ken Agyapong to come to his house for his money.

Find the letter of the school below. 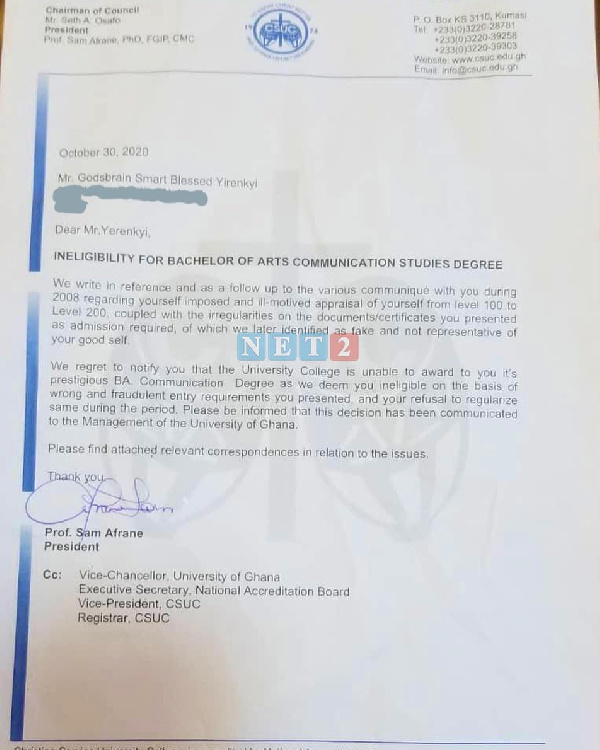 19-year-old lady narrates how man abandoned her after pregnancy