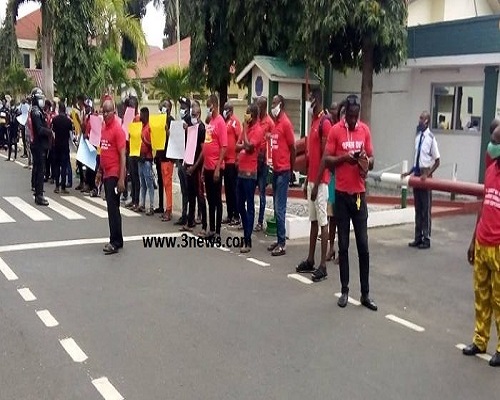 About 200 Nigerians have stormed their High Commission in Accra, demanding the reopening of their shops.

According to the angry Nigerians, who wielded placards in front of the High Commission, their shops have been under lock for the past 10 months without any explanations from officials.

Security has been beefed up at the venue.

They claimed shops of other West African nationals have been opened but there has not been any proper explanation why shops of Nigerians are still locked.

The row between Ghanaian and Nigerian traders stem from the perennial complaints by the indigenous traders that foreigners are engaged in retail business against Ghana’s laws.

The GIPC Law, Act 865, bars foreigners from retail trade, among other businesses, in Ghana.

The matter found its way into the Nigerian House of Representatives, whose Speaker, Rt. Hon. Femi Gbajabialamila, visited his Ghanaian counterpart, Rt. Hon. Aaron Mike Oquaye, to discuss the issue.

The Nigeria government had officially complained to ECOWAS about the reported harassment of its citizens in Ghana, but the government issued a statement to refute this.