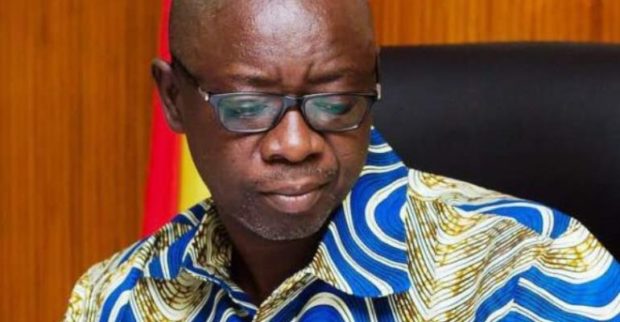 The Minister of Lands and Natural Resources, Kwaku Asomah-Cheremeh, says government has not sold any seized mining excavator.

He asks anyone with contrary information to provide better and further particulars to support his or her claims.

He said, currently, there are 157 excavators after the Ministry took an inventory of excavators seized by the Operation Vanguard and could be located in Adenta,Obuasi and Tarkwa.

Mr Asomah-Cheremeh said this at the Meet-the-Press series in Accra on Wednesday when answering questions from journalists regarding seized excavators from illegal mining sites.

He debunked claims by the opposition National Democratic Congress (NDC) that, there were 500 missing excavators with the allegations that those excavators were sold by government operatives.

On Mr Ekow Ewusi, former Central Regional NPP Vice Chairman’s case who was accused of auctioning seized mining excavators, the Minister said the case was being investigated by the Criminal Investigations Department (CID) of the Ghana Police Service.

Mr Asomah-Cheremeh indicated that the Minerals and Mining laws had not been changed or suspended because of the December 7 elections and would, therefore, deal ruthlessly with anyone caught undertaking illegal mining, otherwise known as ‘galamsey’.

The Minister said government had trained 4,500 small scale miners at the University of Mines and Technology (UMaT), Tarkwa, and currently operating in accordance with approved mining guidelines.

Additionally, 14 Community Mining Schemes were launched by government across the country with the potential of generating 1,6 million jobs for small scale miners.

Also, the Obuasi Mine which was shut down by the previous government had been reopened after Ghana government signed a partnership agreement with a mining investor in August this year.

The Obuasi Mine, he said, currently operated an underground mechanised mining, with 4,265 permanent staff majority of them were Ghanaians.

The Ministry, he said, had established an online portal to help streamline large scale mining companies’ activities, adding that 17 large scale mining firms were registered onto that portal while 187 mining support services had been hooked onto it.