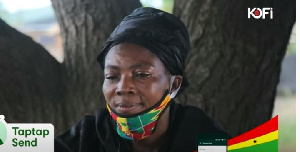 Mother of late Benjamin Okyere, the musician who was allegedly shot by his landlord at Ofankor has for the first time spoken after her son’s demise.

In an interview with KOFITV, she recalled an instance where the landlord threatened her son with a gun in his dream.

“Not too long before my son’s death, he finished his usual prayers and went to bed. He dreamt that the landlord was threatening him with a gun. In the dream he asked my son to leave the house with immediate effect or else he will be killed. About last week, my son called me that he had gotten an apartment elsewhere and that he is preparing to move out,” she stated.

She has recounted several instances where she pleaded with her son to vacate that particular house because of the landlord’s unruly attitude towards him.

“About three months to the rent expiry date, the landlord asked my son whether he will stay or renew his rent. My son agreed to renew his rent and the landlord agreed. Few days later he brought him a letter asking him to pack out of his house. I pleaded with my son to immediately look for a place and leave the house because the landlord was not giving him any breathing space.”

When asked what her wish was at the moment, she replied by saying;

“At this moment, I don’t know what will make me feel better. Unless God. He is my comforter. He should have mercy on me and comfort my soul,” she added.

On Sunday, May 25, 2020, Nana Kankam, allegedly shot and killed Benjamin Okyere, his tenant, over rent payment, at Ofankor.

He was said to have murdered Okyere, for failing to vacate a room he rented two years ago from him.

Four spent shells of AA cartridges were retrieved at the scene, and the suspect was arrested at his residence at Spot M, Ofankor.

A further search in his room revealed two pump action guns loaded with seven and eight rounds of cartridges respectively, and 32 live cartridges.