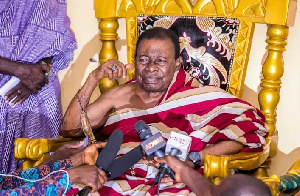 MyNewsGh.com has confirmed from authoritative sources that the paramount Chief of Offinso, Nana Wiafe Akenten III has passed on.

Nana Wiafe Akenten III passed on late this evening, Saturday, October 2nd, 2021 surrounded by family and friends with details kept under wraps for now in line with traditional arrangements.

Elders of Offinsoman and Ashanti are currently being notified of the development pending the necessary rituals and family meetings to bid farewell to the Charismatic traditional ruler.

MyNewsGh.com is withholding any further information about the death pending an official announcement from Offinsoman.

Offinsomanhene Nana Wiafe Akenten III is fondly remembered for his empowerment of the less privileged in his paramountcy, partnering with various NGOs including at one time, The United States Embassy in Accra, to educate Kayayeis in Offinso as well prioritizing the Education of the girl child as a whole in Offinsoman.

He is also known for instilling discipline among various actors within the paramountcy, including sub Chiefs that sold lands to multiple buyers as well political actors whose actions undermined the traditional authority of Offinsoman.

Fire officer drowns while rescuing 3 people from a well