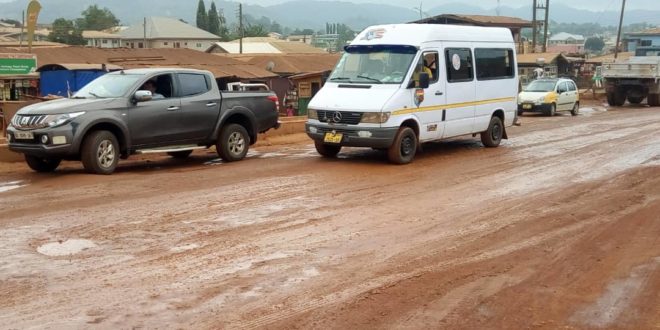 Joshob Construction Limited, the contractor working on the Anwiankwata-Obuasi highway, has begun watering the road to minimize the amount of dust that has been a worry to motorists and residents plying and living along the road, after Otec FM’s report on Thursday.

The watering has given hope to motorists and commuters that the contractor is speeding up their work to meet time to allow smooth and easy passage on the road which they been bitterly complaining since successive governments.

They describe as a lackadaisical attitude of the contractor’s work, explaining that the slow work pace on the road will take a long time for the project to be completed and their economic activities which have been negatively influenced by the bad road will not be solved.

Otec News’ reporter, Evans Agyei Sikapa, who has been reporting on the bad roads within Obuasi municipality since Tuesday said works on the Anwiankwata-Obuasi has been halted and affecting the business activities of the users.

But speaking on Friday, August 23, 2019, on Otec FM’s new programme ‘Asanteman Nkwan’, on a project called ‘Operation Fix Our Roads’ (#OFOR), on the morning show ‘Nyansapo’, hosted by Captain Koda, he said watering machines were seen on the road from Konka junction in Obuasi heading towards Anwiankwanta direction.

“The residents have expressed joy on the watering of the road, saying it would relief them from the dust emanating from the abandoned road which make them to cover their face when commuting. They believed the watering is good sign that the contractor has sped up work,” he reported.

Expressing their gratitude to Otec FM, the residents said “if not the demonstration threats we made through your radio station, the authorities would not have made the contractor to resume works and we appreciate your work”.

‘Operation Fix Our Roads’ (#OFOR) is a project initiated by Otec FM in collaboration with Media Foundation for West Africa (MFWA), to fix bad roads in the Ashanti region. 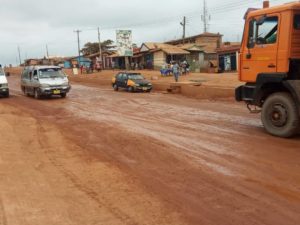 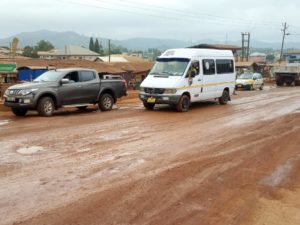