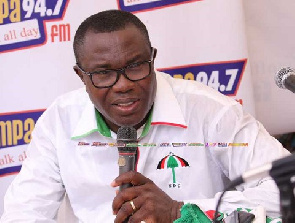 The Chairman of opposition National Democratic Congress (NDC), Samuel Ofosu-Ampofo, is reportedly playing continuous ‘hide-and-seek’ with the Ghana Police Service following a leaked audio recording that has set tongues wagging in the country.

The audio recording contains chilling strategies the NDC intends using for the 2020 elections – one of them being the kidnappings of family members of political opponents.

Two days after his lawyers visited the Criminal Investigations Department (CID) headquarters to ‘authenticate’ an invitation letter served on the NDC Chairman, he is yet to personally report to the police.

As at 5pm yesterday, there was no sign at the CID Headquarters that Mr. Ofosu-Ampofu was coming to them.

DAILY GUIDE’s sources say the police are determined to arrest him wherever he might be if he does not honour their invitation by the close of Friday.

As a result, the police are believed to have secured a warrant of arrest to pursue the NDC Chairman.

Reports said he was scheduled to go to the CID headquarters at 10 am yesterday but cancelled the plan with the excuse that he was travelling to Jomoro in the Western Region for the one-week observation of the late Lee Ocran.

A day before the same Ofosu-Ampofo reportedly said he was attending the same programme in Accra, which he did.

A February 27, 2019 correspondence signed by Assistant Commissioner of Police (ACP) George Tweneboah, Deputy Director of CID had directed Mr. Ofosu-Ampofo to report at 10am the following day.

The police even had a hectic time getting Mr. Ofosu-Ampofo to serve him and eventually had to serve him through his Whatsapp number.

Sources said he was not at home when the police visited his Spintex Road residence in Accra to serve him with the invitation letter.

Interestingly, when the team asked his security man at the gate to deliver the letter to his boss, Mr Ofosu-Ampofu allegedly asked his gateman via the telephone not to collect the letter and asked the police to take it to the NDC headquarters at Adabraka, Accra.

At the party headquarters, the police source said Mr. Ofosu-Ampofo was not in the office and nobody was ready to receive the letter on his behalf.

The sources said a scanned copy of the letter was personally sent to Mr. Ofosu-Ampofo through his Whatsapp line around 5:00pm that same day, but surprisingly within 30 minutes of the action, the letter went viral on social media and the mainstream media started discussing it.

The leaked tape has expectedly stoked fire in the opposition NDC and generally changed the political conversation in the country.

It took the party unawares, rendering the adhoc responses ineffective and even exposing the fault lines in the party’s organization.

With the initial responses pointing at a mole within the party failing to help the cause of the party, it did, however, indicate that some members at the executive level were under suspicion.

A situation whereby the party managers are not singing from the same hymn book obviously suggests a political grouping in disarray occasioned by the leaked tape.

Even as the police await the arrival of the National Chairman at the CID headquarters, the party itself is hunting for the source of the leakage.