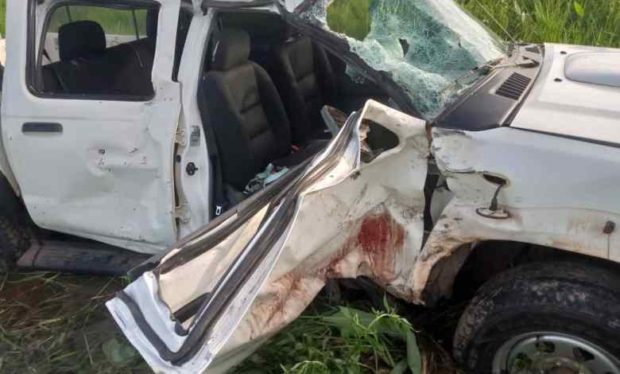 One person has been confirmed dead while 10 others are in critical condition after a gory accident at Abura Dunkwa in the Abura Asebu Kwamankese District of the Central Region.

The accident happened Saturday morning around 11:45 between a taxi and a KIA truck.

Meanwhile, the Abura Dunkwa Government hospital has been accused by the accident victims of being the cause of losing the taxi driver’s life for sending him out of the hospital to go for an ambulance before being treated while in a critical condition since he was sent to the hospital with a taxi.

Speaking in an interview EIB Network Central Regional Correspondent, Yaw Boagyan, the victims explained that they were in the KIA truck with registration number GN 9757-Z going to Accra but suddenly collided with a taxi with the registration number AC 370-15 on the Abura Dunkwa to Nyankumasi road.

They explained that both of the drivers were bleeding profusely and with the help of some residents, sent them to Abura Dunkwa government hospital but while at the accident scene they saw the same car had returned with the two accident victims inside and when they asked the driver why he has returned the victims he said, the nurses at the hospital said unless they are being brought by an ambulance they would not be treated.

They, therefore, accused the nurses at the hospital of being the cause of the drivers’ death since the deceased was a little bit okay when he was sent to the hospital.

Abura Dunkwa Taxi drivers who are colleagues to the deceased in an interview with Yaw Boagyan threatened a demonstration against the hospital authorities.

Meanwhile, the incident has been reported to Abura Dunkwa police station for investigation.

The body of the deceased has been deposited at Abura Dunkwa Government Hospital mortuary for preservation and autopsy.

‘It is our collective action to deepen peace’- Dr. Ishmael Norman