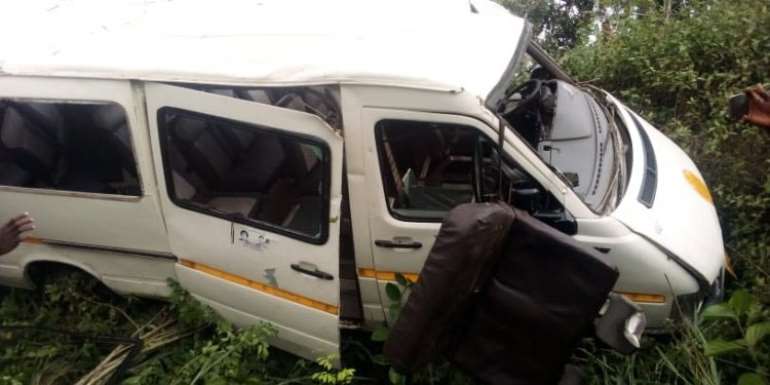 One person has been confirmed dead while about ten passengers have been seriously injured in a gory accident at Ekumfi Akwakrom in the Ekumfi District of the Central Region.

The accident occurred on the Winneba-Cape Coast Highway Thursday evening around 4:00 pm.

Investigations conducted by EIB Network’s Central Regional Correspondent Yaw Boagyan revealed that that, the Toyota Corolla in an attempt to overtake another vehicle in a sharp curve collided with the Metro Mass Bus.

Speaking to some of the victim’s in the Metro Bus they said, the metro bus driver saw the Toyota Corolla making a wrongful overtaking and in an attempt to swerve the bus collided with the Toyota corolla causing the driver of the Toyota to die instantly leaving 10 passengers in the metro bus seriously injured including the driver.

Some Eyewitnesses in the community called the Fire Service and the Police from Mankessim who cut the Vehicle into pieces before removing the deceased who was stuck in the car.

The injured people are receiving treatment at the Mankessim Roman Catholic Hospital whiles the deceased have been since deposited at Saltpond mortuary for Preservation and autopsy.

The deceased is yet to be identified.

The Vehicles have also been sent to the Jedu Police Station for investigations.

WATCH: Do or die’ t-shirts pop up on social media