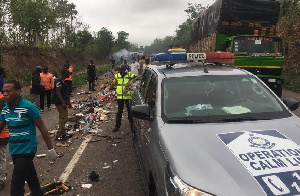 The incident, which happened at about 4:30 am on Saturday claimed the life of the police officer driving the patrol vehicle, Lance Corporal Ernest Oteng instantly while leaving the rest of the three in critical condition.

The three critically injured officers are Sergeant Seidu Bouri, Lance Corporal Paul Ofori and Lance Corporal Elijah Mensah who have since been transferred to the Tamale Teaching Hospital for further treatment.

The driver of the bus has been arrested and detained as investigations continue.

The accident has left the police vehicle damaged beyond repair.

Senior police officers of the Walewale Police Command who confirmed the unfortunate incident to MyNewsGh.com indicate that they are currently at the Tamale Teaching Hospital commiserating with the injured and while providing whatever help they can.

Our strike still on; we’ve not received any injunction – Nurses

Policeman killed in highway accident, 3 others in critical condition