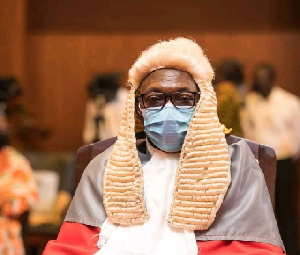 Finality was brought to the recusal or otherwise of Justice Honyenuga as the presiding judge in the trial of former Chief Executive Officer of COCOBOD Dr. Stephen Opuni on Tuesday, October 26, 2021.

The review was triggered by an application by Attorney-General Godfred Dame who argued the removal of Justice Honyenuga from the case by the Supreme Court was unlawful.

Dame stated in his submission that the trial judge did not commit any breach of rules of court or any law when he dismissed a submission of “no case” and ordered Dr. Opuni to open his defence.

As with any review case at the apex court, the composition of the judging panel had to be upgraded with two more judges, taking the number from the initial five that rules 3-2 in favor of Opuni to seven.

At the end of sitting on Monday, the court’s verdict read that it had overturned its earlier ruling and that Justice Honyenuga could sit as the trial judge for the criminal prosecution of Dr. Opuni.

The verdict read 4-3 in favor of the state.

Below is how the seven judges voted

For the argument by the AG

Against the argument by the AG

The verdict shows that neither of the five judges who sat on the initial case changed their mind after hearing the argument of the AG.

The additional two judges however ruled in favor of the AG which gave the state a 4-3 victory.

Today at the newsstands