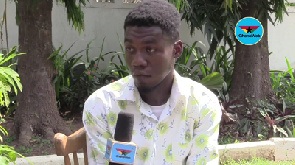 Our meetings at Osu Castle was for ‘morale’ – De-Eye executive

The Head of the Social Media department of the e De-Eye Group, Nelson Ampofo has disclosed that members of De-Eye Group meet at the Osu Castle for ‘morale’.

He told GhanaWeb in an interview that they mostly meet on Mondays to see whether there has been some job opportunity for them or some is yet come.

He added that they sometimes get the hint that there is an opportunity at the Railways and therefore their leaders are speaking to the authorities to get them employment.

Nelson Ampofo indicated further that about 1000 to 2000 members meet the leadership of De-Eye Group during their Monday general meetings.

The group according to the exposé received considerable state support, training in the Presidency Annex since the party won power in 2017.

Choman, the leader of the group has his office inside the Presidency Annex.

De-Eye Group is not registered as a private security company and was reported by a pro-NPP newspaper, the Daily Guide, as being a ‘vigilante group’.

The Daily Guide report in June 2012 dates the formation of the group as far back as 2009 after the party had lost the 2008 general elections.

National Security Ministry has attempted to move the group from the Presidency Annex but powerful hands stopped the Ministry.

The menace of party militias has grown more pronounced since the New Patriotic Party was sworn into office in January 2017.

Two days after the swearing-in of President Akufo-Addo, some members of the NPP’s invisible forces attacked a police officer who was undertaking his lawful duties at the Presidency. Though the place is highly fortified with police, soldiers and personnel from the Bureau of National Investigations (BNI) and National Security Secretariat, no one was arrested.

Government appointees have been sacked from their offices by groups such as Delta Force based in the Ashanti region and Kandahar Boys based in Tamale in the Northern region.