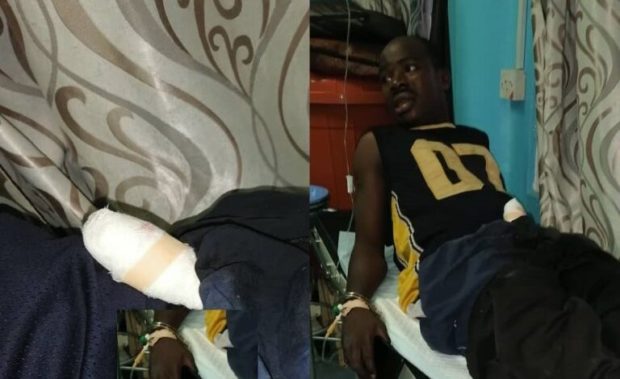 An armed robber and a rapist would live the rest of his life without a p3nis after it was bitten off by his victim while receiving a ‘Blow J’ after a robbery operation.

23-year-old Emmanuel Ankron is reported to have entered the room of his 24-year-old student victim at Abompey new site, a suburb of Obuasi, drugged and had s3x with her.

According to the victim, when she woke up, she saw the suspect with a cutlass and locally pistol on her after which took her cash of GHS550, TV set and a mobile phone.

He then decided to leave the room but changed his mind and ask her to suck his p3nis and out of fear she could be harmed, she obliged but in the process, she bit off his p3nis and that the suspect also bit her back out of pain.
The suspect with blood oozing from the wound managed to run away leaving the TV set and the mobile phone behind.

The victim quickly reported to the police and thereafter went to Anglogold Ashanti Hospital for treatment but few minutes later, the suspect also came to the same hospital and she alerted the security men and the suspect was arrested and put under guard at the hospital.

He was later identified and when police visited the crime scene, the cut penis was retrieved and sent to the hospital for preservation.

Armed robbers attack church in Sandema, run away with offering