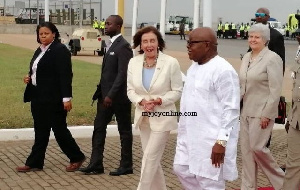 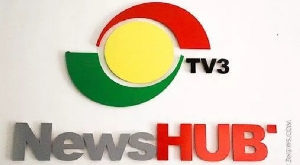 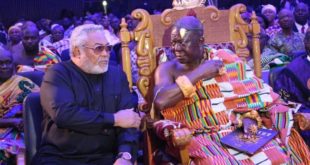 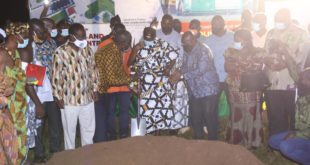 The first woman Speaker of the United States House of Representatives who is leading a Congressional delegation to Ghana have arrived in Ghana.

Nancy Pelosi and her delegation touched down at Terminal 3 Sunday afternoon and were met by the US Ambassador to Ghana, Stephanie S. Sullivan and the Speaker of Parliament, Mike Aaron Ocquaye.

Some members of Parliament, as well as other dignitaries, were also at the Kotoka International Airport to welcome the US Speaker.

They will hold high-level discussions with President Akufo-Addo as well as speak with her Ghanaian counterpart Mike Oquaye and other senior government officials.

There is a dinner held in her honour tonight at the Jubilee Lounge of Parliament where Speaker Pelosi will respond to a toast.

She will also deliver an address to the Ghanaian Parliament on Wednesday.

“It is a special honour to be the first U.S. Speaker of the House to address the illustrious Parliament of Ghana, as we build on the partnership between our nations,” she said.

While in Ghana, Speaker Pelosi and her delegation will pay respects at Cape Coast and Elmina Castles.

At the Cape Coast Castle, they will be at the ‘Door of No Return’ to observe the 400th Anniversary of the First Enslaved Africans Landing in America.

“As we face evolving global security challenges, our delegation will thank our men and women in uniform and receive briefings from U.S. military leaders at U.S. Army Africa headquarters,” Speaker Pelosi said ahead of her visit to Africa.

She added that once they arrive in Ghana, “our delegation looks forward to high-level discussions on key issues such as regional security, sustainable and inclusive development and the challenges of tomorrow including the climate crisis.”

The team will then visit the US Army Africa headquarters in Italy. 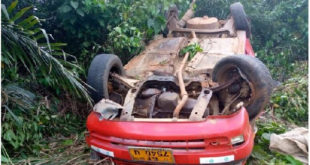 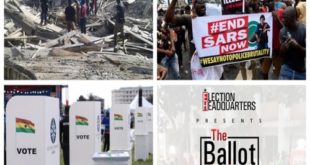