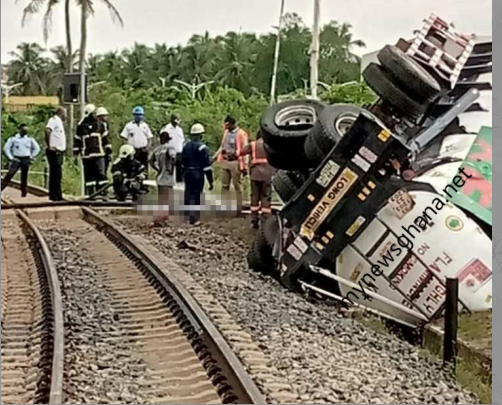 Driver of a fully-loaded Diesel tanker and his mate escaped unhurt after their vehicle was smashed by a train at a rail crossing near New Takoradi in the Western Region on Wednesday morning.

According to some eyewitnesses, the diesel tanker was heading to a fuel depot in New Takoradi but unfortunately had its engine stop right on the railroad.

An oncoming train, which was heading towards Kojokrom from the Takoradi Harbor direction hit the rear of the tanker causing it to overturn.

Residents in nearby communities rushed to the scene and started siphoning the fuel.

It took the timely intervention of the police and the fire officers to avoid any mishap or casualties.