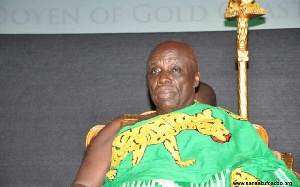 Planting for food and jobs is our future – Okyenhene

The Okyenhene, Osagyefuo Amoatia Ofori Panin has stated that government’s flagship agricultural project, Planting for Food and Jobs (PFJ) is the future for people in the Akyem Abuakwa Traditional Area.

According to him, “Planting for food and jobs, I will say again and again is our future and not community mining.”

He added that “Our option is planting for food and jobs because it’s sustainable.”

The Okyenhene noted that indigenes of Akyem Abuakwa would take pride in growing foodstuffs such as maize, rice, among others.

He stated that investment in agriculture was significant, describing PFJ as the biggest agricultural policy ever.

The Okyenhene made the remarks when the Minister of Lands and Natural Resources, Kwaku Asomah-Cheremeh, paid a courtesy call on him at his Palace at Kyebi on Monday, July 29, 2019.

Government introduced the Community Mining scheme after it lifted the ban on illegal mining as part of efforts to promote responsible and sustainable mining.

But the Okyenhene was of the strong conviction that “Community Mining and Planting for Food and Jobs cannot co-exist.”

Tags PLANTING FOR FOOD AND JOBS