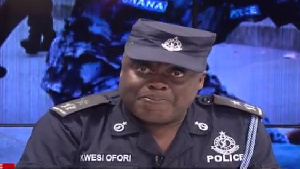 Following reports of attacks on motorists by suspected robbers on the third tier of the Kwame Nkrumah interchange, the Operations Unit of the Accra Regional Police Command has commenced intensive day and night patrols on the interchange.

The 3-tier Kwame Nkrumah Interchange was constructed to replace the Kwame Nkrumah roundabout as a means of easing traffic flow at that road intersection in the centre of Accra.

However, recent reports on social media indicate that some suspected criminals place used wooden boards fitted with nails on the bridge with the intention to deflate the tyres of vehicles and force motorists to stop for the robbers to attack the occupants.

A victim, who wants to remain anonymous, narrated her experience on the overpass: “I narrowly escaped with my life when after suffering two punctured tyres, I managed to get home safely to find six nails in them and two extra holes.

The social media message has caught the attention of the police intelligence and operations unit both at the national and regional level, which has led to the quick intervention to forestall chaos.

When contacted, the Head of the Operations Unit at the Accra Regional Police Command, Assistant Commissioner of Police (ACP) Mr Kwesi Ofori, said the police had deployed the inner city patrol team to make frequent visits to the area and keep an eye on activities there.

However, he said, no official report of the attack described in a WhatsApp message that had gone viral had come to the attention of the police, “but it is our duty to protect the citizenry and we must not wait for criminals to strike before we act.”

He explained that the move to patrol the interchange was part of an anti-crime campaign activated by the unit, following reports of attacks on motorist on that stretch of road by some suspected criminals.

He warned that any individual found walking on the interchange would be arrested since the overpass lanes were not meant for pedestrians.

“There is no pedestrian walkway up from the ground to the overpass lanes because it is not meant for pedestrian use.

We do not expect to see anyone walking on the upper lanes. Anyone seen walking there, especially at night, could be said to be behind the crime that has generated public concern and it is our duty to bring such a person or persons to book,” he said.

He also cautioned traders around the interchange not to trade on the interchange, saying some traders claimed they walked to the third tier to have a bird’s eye view of the area.

Previous Citizen Watch commends gov’t for swift action on farmgate price for cocoa
Next Adenta Defeat: Oye Lithur paying for her ‘sins’ against me – Rachel Appoh