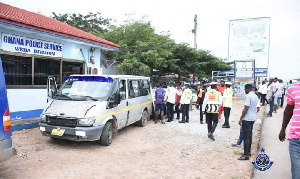 The Police Motor Traffic and Transport Department(MTTD), led by the Director-General, DCOP/Mr. Nyarko Aboagye have impounded 22 vehicles for violating various road traffic offences along the Weija-Kasoa stretch of the N1 highway during a special exercise code named “war” Against Road Traffic Indiscipline on Friday, 3rd August 2021, between the hours of 3pm and 6:30pm.

The Police MTTD, collaborated with National Road Safety Authority, together with Citi FM/TV crew in carrying out this operation.

During the exercise, 22 drivers were arrested for flouting several road traffic regulations and are currently being processed for courts in the Greater Accra Region. Meanwhile, their vehicles have been impounded at the Weija Divisional MTTD.

Some of the offences the arrested motorists committed in this special exercise include dangerous driving, driving on the shoulders and verges, driving in the opposite direction and facing on-coming vehicles among others.

The War Against Indiscipline is aimed at deterring motorists who flout road traffic laws which contribute to preventable road crashes and needless loss of lives and damage to properties, rush-hour congestions on major roads within Accra, Kasoa and adjoining communities.

The Police advised the motoring public are advised to abide by road traffic regulations at all times to enhance road safety and prevent accidents which sometimes lead to the lost of lives and properties.

Here are Ghana’s four presidential jets from 1962 till date