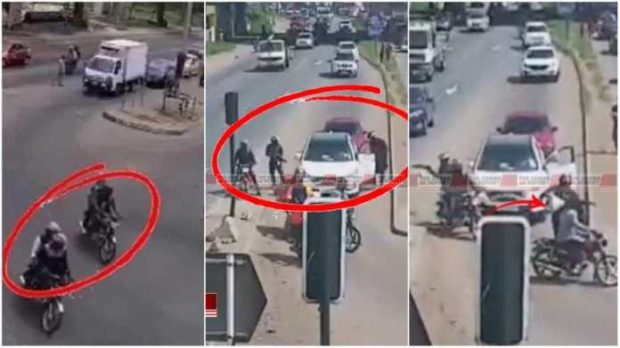 The Police Service in a statement signed by the Director-General of Public Affairs, ACP Kwesi Ofori, dated September 24, 2021, further announced a reward of GH¢50,000for anyone who provides information leading to the arrest of the gang.

“The police in Accra have instituted some urgent additional security measures to arrest a robbery gang attacking people within the region in recent days. We, therefore, plead with residents to bear with us with regards to the scaled-up security measures to deal with this threat.

“We also urge the public and corporate institutions who intend to withdraw and deposit huge sums of money to exercise caution or contact the police for assistance for such transactions. Any suspicious behaviour or movement of persons should be reported immediately to the police on the emergency numbers 18555, 191, 0302773906 or 0302787373.”

“We have placed a financial reward of Fifty Thousand Ghana Cedis (GH¢ 50,000.00) on information that will lead to the arrest of these thugs,” the police statement said.

The police while appreciating the public for its continuous support, served assurance of its commitment to ensuring public safety.

“We thank the public for their continued assistance and we want to give the strongest assurance that with their support, our communities will remain safe. We will never, ever allow these thugs to disturb our peace as a people,” the police.

There have been incidents of recorded robbery cases in the Accra Region in the past few days.

Some armed robbers have in the past days undertaken successful daylight robberies including one incident at Apenkwa junction.

The incident captured on CCTV saw the gang riding on motorbikes accost a woman who had withdrawn money from the bank in traffic.

The robbers who made away with a reported amount of GH¢29,000.00 shot another motorbike rider who they mistook for a police officer in the process.