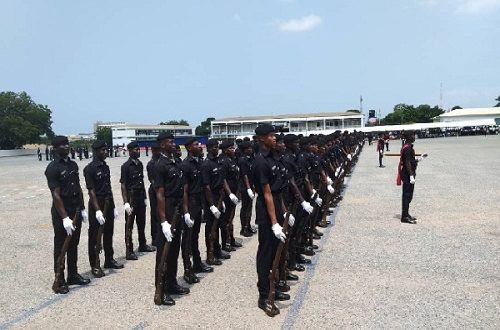 The Ghana Police Service has reopened its training school in Koforidua in the Eastern region despite the directive against school attendance by President Akufo-Addo.

The recruits of the training school who were asked to go home when President Akufo-Addo directed the closure of educational institutions have been recalled.

On Sunday, May 12, 2020, the President announced an extension of the closure of schools, Churches and mosques by another one month.

Starr News checks reveal the recruits are not medically screened before entering their hostel.

The recruits were seen Wednesday morning tidying up the environment of the Koforidua Police Training School. They were not wearing nose masks.

Ghana has recorded 5127 confirmed cases of coronavirus with recoveries at 494. Another 130 patients are awaiting their second negative test to be declared recovered. 22 people have so far died from the killer bug with active cases at 4, 611.

The Public Relations Officer of the Eastern Regional Police Command DSP Ebenezer Tetteh refused to comment on the matter saying the national headquarters is best placed to respond to questions over the reopening.