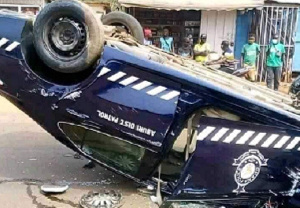 Prince Amegavi, the taxi driver who was hired to convey policemen on duty to salvage people trapped in a highway robbery has said that it would be difficult for him to work with his car again.

He said the present state of his car which has its engine broken down, and the body mutilated by bullets from the gunshots coupled with bloodstains everywhere in the car, he cannot feel comfortable working with it ever again.

“I need a new car. Bullets have mutilated the car and the bloodstains in it will not encourage me to keep working with that car even if it is fixed. I will feel haunted. The blood and the death…I need a new car. The government should help me,” he said in an interview with the media at Pramkese in the Kwaebibirem Municipality of Eastern Region.

According to Prince Amegavi, who is also known as Borga, due to the gunshots that penetrated the windscreen, particles of the glasses splashed into his eyes and till date he feels dizziness and pains in his eyes.

He added that now that his car is grounded, he is unable to make daily bread for himself and for his family.

Amegavi gave the narration of the incidence: “I had closed from work going home. I went to Zongo to drop someone and was going home but decided to pay my booking fee at the lorry station.

“On our way going, while trying to climb a hill, suddenly I saw a torchlight on my forehead. I did not see anything. All I could hear was “shoot”. I did not know what happened, I turned my head then a bullet hit my cap and removed it onto the seat.

“By the next shot, I found myself under my steering. I did not know how I did that. After a few scuffles, like three-four minutes, we later realised that the three bullets shot had hit the policeman sitting in front of the car and had died.

“I had to reverse and rush back home. Due to poor road, my car hit potholes and as a result, my engine ceased and could not move, we luckily found a Hyundai car and referred the victims and the other officers into it. The gunshots hit two policemen. We were five in the car, four policemen and myself,” he narrated.

The body of the late Sargent Moses Tetteh Nartey, who was shot dead, has been deposited in the Asamankese Government Hospital morgue pending further investigation.

The other injured policeman who was shot in his ribs is receiving medical attention in the same health facility.

Related Topics:policeTAXI DRIVER
Up Next