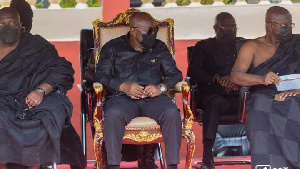 The passing of Nana Agyei Twinie of Akyem Abuakwa in the Eastern Region saw a meeting of President Nana Addo Dankwa Akufo-Addoand his predecessor John Dramani Mahamaover the weekend.

A Dailyguide report indicates that President Akufo-Addo and John Mahama both attended the one-week ceremony of Nana Agyei Twinie which was held in the Eastern Regional capital of Koforidua.

John Mahama according to the report arrived at the ceremony in the company of Professor Naana Opoku Agyeman, 2020 running mate, Julius Debrah, a former Chief of Staff, Samuel Ofosu Ampofo, National Chairman of Opposition NDC and other party bigwigs.

John Mahama is reported to have proceeded to the one-week ceremony of Nana Kodua Kesse II who is a former member of the Council of State.

President Akufo-Addo however could not attend that ceremony but delegated the Eastern Regional Minister Seth Kwame Acheampong, the Member of Parliament for New Juaben North, Nana Agyei Boateng to represent him.

President Akufo-Addo and John Mahama have recently been engaged in some verbal attacks, criticizing each other for his management of the Ghanaian economy.

In an interview with the BBC, John Mahama said that President Akufo-Addo’s management of the economy has been atrocious.

“The economy messed up before Coronavirus set in. If the economy was so good, why is it in shambles? Côte d’Ivoire’s economy is surviving despite Coronavirus. This government is just engaged in propaganda. Life is hard for citizens,” he insisted.

But President Akufo-Addo hit back stating that, Mahama cannot lecture him on economics since his administration led the country into a ditch.

“I wonder whether this statement was made tongue in cheek by the former president. When you look at the record that this political leader, who can accuse my government of mismanagement, there are a few facts that when you put on the table to compare his performance and mine, it would tell you whether what I am offering the people is economic mismanagement.”

He continued, “I wonder what words should we describe his (Mahama) stewardship of Ghana. It is an unmitigated disaster, that’s what I would call him.”