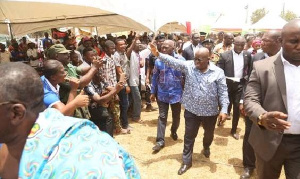 President Nana Addo Dankwa Akufo-Addo was on Saturday, October 2, met by protesting youth at Twedie as he continued his four-day tour of the Ashanti Region.

The youth were incensed by what they describe as a deliberate move by the contractor in moving equipment to the site because the president was to inspect the project.

But the residents claim the project has stalled for the past years and they suspect the equipment will be moved back out of site when the president leaves.

But the contractor denied the allegations.

“I am now waiting for the approval of asphalting,” he told TV3‘s William Evans-Nkum.

The President had also inspected the John Agyekum Kufuor Senior High School in Akropong and the Abuakwa-Tanoso road on the N6 highway.

On Sunday, he is expected to continue his tour of the region, including visiting the Bekwai Hospital.